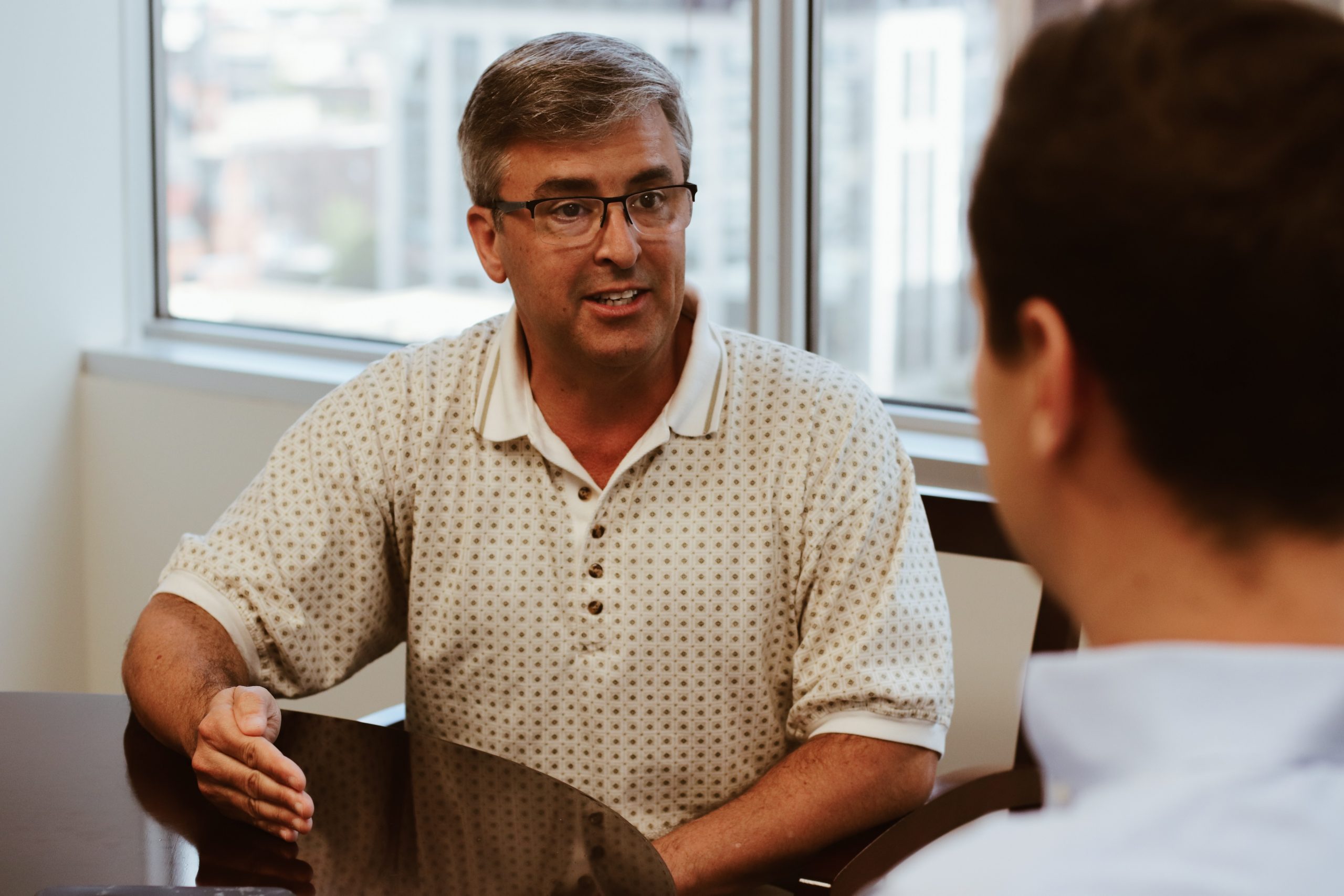 By the time you read this, there’s no telling where Bill Todd might be. He could be in another state leading a team on a workforce development project, or he might be down the street getting coffee with a recent grad looking to build a network. He could be at home with his family, and there’s a decent chance he’s in the conference room playing guitar through the PA system.

Wherever he is, I’m glad to have sat down with Bill recently to talk about all things PR and marketing. As president of o2, Bill has spent 18 years setting an example of leadership and encouragement, not to mention maintaining relationships with just about everybody in Birmingham.

It’s hard to think of someone who embodies our core value, “Do good,” more than Bill. In an industry driven by relationships, he’s THE guy to have on your team. Or in your band.

You’ve been in PR for a long time. What are the most important lessons you’ve learned throughout your career?

Really, it’s the 4 P’s. People are so important to our business and without people, there is no business. As communicators, we’re either communicating with people or trying to get people to do something with us or for us, and we need people to sign on to what we’re about. There’s also Perseverance, because there are a lot of days you’re going to want to give up and you just can’t. You can never, ever give up, no matter what you’re doing. I don’t care if it’s weight training or if it’s camping or whatever your passion is. Whatever your work/life is, you have to be persistent and persevere. You also have to be Patient, because good breaks are going to be a long time coming, and they’ll all come in spurts. You just never know, so Patience is always going to help you in the end. Staying Positive is essential. There’s so much about this business that can defeat your spirit every day. You have to learn to detect that feeling and deflect it. You have to have something that points you to a greater destiny beyond what you sense is happening today. For me, that’s my faith in God.

How have you seen the world of marketing evolve throughout your career, and as president and CEO, how do you manage to stay current with all the latest trends and strategies?

I’ll start with the last part first. You almost have to have your head under a rock if you can’t keep up with what’s going on in our industry right now because there are so many great sources of information. We still have a healthy trade press in advertising and marketing and I think it’s not gone backward, it’s really come forward. I think a lot of light is being shed on different parts of our business. A lot of advertising professionals are acknowledging that we don’t know exactly which way this thing is going; a lot of people say they know which way it’s going, but nobody really does. But that’s part of the fun of it, and that’s the people part of it because that’s the part that’s never going to change – the fact that you’re always going to be dealing with people.

In terms of how marketing has changed, I really think there’s been a lot of focus on self-flattery and a lot of people are taking a cue from social media, which is sort of an artificial representation of our lives, and they’re sort of appropriating that for their brands. I think that’s a bit of a mistake. We all need a sense of reality about who we are and where we come from so that we don’t paint a picture that’s too unattainable for other people, other groups of people, to have what we have.

If you had to choose one professional turning point in your career, what would you choose?

That is such a fascinating question and I’m so glad you asked it because I really had to struggle with which is the best answer. There are so many turning points in my career, it’s really hard to document which one is best. But if I have to go back in the midst of time I would go back to when I was a TV reporter and I made the jump from TV into PR. I was a starving artist at a local TV station and I just could not break into the daytime anchor routine and there was just no future in that. So I’m very fortunate that at an early age I realized I was not going to be a TV personality and to realize that my career was going to be in public relations. Though at the time, I didn’t know much about it … I didn’t know anything about PR when I made that jump. I’m so glad I did.

You’ve met with a lot of young, aspiring communications professionals over the years, me being one of them, so what’s the best piece of advice that you can give to someone who is visiting an agency in hopes to join the team one day?

My answer today is totally different than it would have been 10 years ago. My answer today is to be aggressive with us. Don’t be afraid of us, don’t be intimidated by us, don’t be intimidated by a title – president or senior something. In this day and time, you may know more about a topic than we do. With the level of information, the level of technology, the level of sophistication of younger people coming into our business today, I would say to see us as equals. We don’t have time anymore for reporting lines of structure, organizational chains of command … there’s no time for that. We’re moving too quickly. So, I want young people to come to us aggressively, see us as equals and say, “Hey, this is what I bring to the table. Let me help you accomplish something.”

And I don’t want to be Mr. Todd – I want to be Bill because, again, you’re going to know twice as much, or more, as I do about anything that’s more recent than 2000. So, as fast as we try to keep up as senior leaders, there’s no way that we can. We need young people to come in, bring that life to us, bring that passion, bring that joy.

You’re a talented guitarist, not to mention you have your MBA and you’re also accredited in public relations, so could you talk a bit about the importance of being a full-time learner and challenging yourself intellectually?

I was very fortunate at an early age. I was the first person in my family to graduate from college. My dad was a life-long learner, but he never went to college. So, I was very fortunate at an early age to get that accomplishment and, once I did that, I had several great supervisors. One of them in Montgomery really forced me to get my accreditation in PR, and if he hadn’t done that I would not be accredited today. I’m convinced. He made it a growth point for me. I was not going to get a paycheck, possibly, if I didn’t get accredited, so when it got down to that I understood the importance. Life-long learning – you can never lose the sense of wonder, even in the smallest things. Find something you can tinker with, whether it’s a guitar or a camera or a paintbrush; whatever it is, find something that gives you a sense of identity outside this business. I will tell you that advertising and marketing, it’s a machine, and it will eat you up if you don’t have a grounding in other places in your life. So, keep things in their appropriate compartment. Don’t let career come over into family, don’t let family come over into career, don’t let your personal fears and inhibitions hold you back. Keep things in their appropriate compartment, but find those creative outlets that you can be passionate about. If the world came to an end, you’d be happy doing it.

Can you touch on your relationship with Shelley?

Nobody would have put a black entrepreneur/radio personality/philanthropist together with a white male from another part of Birmingham; it was so unlikely that I ever met Shelley Stewart in the first place. Shelley was the first African American male that ever gave me a hug, and the first day I met him he hugged me and said, “Welcome home, son.” That was 18 years ago. I can’t describe how much of a father figure he’s become to me. Shelley’s a genuine person – he’s taught me as much as anybody about the people part of this business that I gave this whole interview about. Shelley is like a dad to me, and my own dad has passed away, so Shelley’s it. We talk every week, rain or shine, mostly about football and athletics, but we share a common bond and it’s been joyful to have him in my life.

What was the last song you were super-pumped to learn on guitar?

Actually, it was last night. “Bittersweet Symphony” by the Verve. Everybody knows that famous riff, the early part of the song. I just took the vocal part and made a melody out of it on my guitar and probably drove my wife out of the house with the amp so loud.